The following transcript is an extract from the BlueBridge Webinar of 19 May 2021, entitled DAC6 for Corporates – Part II: Illustrative examples of the Intragroup Hallmarks under the EU’s Intermediary Disclosure Regime.

Previously, BlueBridge had presented a webinar on the DAC6 Intragroup Hallmarks, which target cross-border transactions between (mainly) related parties seeking to arbitrage differing tax treatments across jurisdictions. During that webinar, we explored the underlying aims and EU-wide interpretations of these Hallmarks. Due to time limitations, however, we set up a subsequent webinar in which we explored three concrete examples: The IP box scenario, a hybrids’ scenario and an asset transfer scenario. The following is lifted from our DAC6 Examples’ webinar, including these items:

You can access the 19 May 2021 webinar video and slides in our DAC6 for corporates webinar recap. 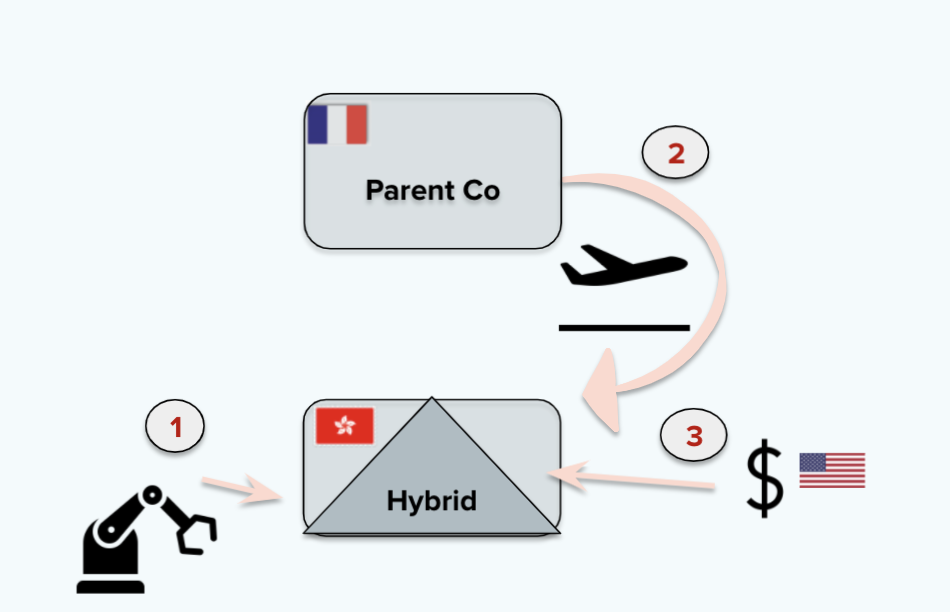 DAC6 example number two: Here, we have a parent company, French once again, and it has a hybrid entity subsidiary in Hong Kong. A hybrid entity for those unfamiliar with the term, is an entity that is treated differently in the jurisdiction where it's located and the jurisdiction where its owner is located. The check-the-box system under the US laws is a famous example of how hybrid entities can be created for tax advantage reasons and non tax advantage reasons.

In this scenario, this Hong Kong subsidiary is treated as a partnership or a flow-through entity in France, meaning that all of the income that the hybrid earns is deemed to flow directly up to the parent company as if it had been earned directly by the parent company. However, in Hong Kong, the hybrid is treated as a taxable entity as a corporation.  And this creates, let's say planning opportunities that people may take advantage of and that DAC6 is looking to identify. So we're going to look at the following transactions. In transaction one, the subsidiary purchases machinery, which is an item of depreciable personal property. In scenario number, sorry, in transaction number two, the parent company leases an aircraft through the subsidiary and in transaction number three, the subsidiary receives a payment from the US which is subject to withholding by the IRS.

Let's start with scenario one, the sub purchases machinery. First question is, is this a DAC6 Cross-border Arrangement? Well, to be a Cross-border Arrangement, you need not only that EU jurisdiction in the mix, but it also has to concern more than one jurisdiction. And at first impression, assuming that the machinery was bought in Hong Kong from another Hong Kong company, which is normal, I suppose, there's no cross-border element.It's a purely domestic interaction. You buy it, it depreciates, you claim the appreciation reductions in Hong Kong and that's that. Except because of the treatment of this entity as a hybrid entity, the parent company may be entitled to take depreciation on this as well. And so what makes this a Cross-border Arrangement for DAC6 purposes is not the purchase of the machinery or anything you do with the machinery, but it's the tax implication that it has in a different jurisdiction. It doesn't even need to have money flowing up there. They're just entitled to it.  It's a deemed activity, phantom depreciation rights. But the moment that the French parent company exercises those rights, boom, you have a cross-border scenario.

So in this situation, assuming that the laws of tax codes of France and Hong Kong so allowed for this, making no opinion on that, you could have the hybrid corp treated as a fully taxable entity in Hong Kong, taking a depreciation deduction on the machinery it's bought. From the French standpoint, however, that machinery is owned and operated by the French parent corp because the hybrid is treated as a flow-through entity. And therefore all the tax attributes flow up to the parent company, including the right to take depreciation on any depreciable property that is owned by the company. So in this situation, you could easily meet HMC2 because you could have depreciation on the asset being taken in multiple jurisdictions.

For transaction number number three, the Hong Kong sub receives a payment from the US that is subject to withholding. Okay, so here we have the US dollars coming in. They're withheld upon by the IRS under the qualified intermediary regime, for example, or other international tax matters. But Hong Kong says, okay, we take that into account. We're going to deduct your Hong Kong tax bill based upon the US withholding tax, okay? The French do the same thing. We'll deduct your French tax bill by the amount of the US withholding tax. Now, in certain circumstances, that's fine. That will not result in relief from double taxation. That will be how the system works when the credit system between France and Hong Kong is set up to allow it to work.

Let’s throw some numbers at you. Let's assume the payment from the US is $100. Let's assume that the withholding tax in the US is 10%. So $10. Let's assume that the relevant corporate tax rate in Hong Kong is 20%. So $20.  And let's assume that the relevant corporate tax rate on this payment in France is 30% or $30. Well, let's look at it. So the money goes into Hong Kong. Let's say $10 is taken out by the US. Hong Kong says, okay, we want $20 off of this payment, but we recognize we have a treaty with the US for example, and the US has taken its $10. So we're going to credit you those $10 and we're just going to take $10 more. The end result being the total tax rate is now 20%. Okay. France, looks at the same thing they say, okay, the US took $10. Hong Kong took another $10. So we're just going to take $10 more and then the end outcome is going to be that it's subject to $32 in total tax. And we have all these double taxation treaties that mean that this will balance out for us in the end. So we're all happy. Great.

What if though, instead of looking at the Hong Kong tax as including the relief from double taxation, they took the whole amount of the Hong Kong tax and they added the US double taxation relief to it? So now the French parent company is saying, okay, well, you paid your 20% taxes in Hong Kong plus you have this $10 that the US took. So we're going to credit you $30 on this payment. And therefore you don't owe us anything because we see $10 taken from the US, we see a $20 tax in Hong Kong. That's $30.  That's what we think the correct tax is on this payment and so you don't owe us anything more. In which case, of course the parent company is now benefiting from 10 extra dollars that it wouldn't have had otherwise if it were not able to double up on the relief from double taxation in multiple jurisdictions.

Written by Paul Millen
Paul is a first mover and foremost thinker on the impact of the MDRs and DAC6 on the financial services industry, having spoken on the topic at prominent tax conferences in Switzerland and abroad and published detailed analyses in leading periodicals since 2018. As the founder of Millen Tax & Legal GmbH, he advises a range of clients, including banks, trust companies, fund managers and single family offices, on an array of US and cross-border tax and legal matters, most notably FATCA and CRS.

On 19 May 2021, BlueBridge presented Part II of our webinar on the DAC6 Intragroup …

On 14th April 2021, we presented a webinar on the DAC6 Intragroup Hallmarks: The Hallmarks …

The following transcript is an extract from the BlueBridge Webinar of 19 May 2021, …