The following transcript is an extract from the BlueBridge Webinar of 19 May 2021, entitled DAC6 for Corporates – Part II: Illustrative examples of  the Intragroup Hallmarks under the EU’s Intermediary Disclosure Regime.

Previously, BlueBridge had presented a webinar on the DAC6 Intragroup Hallmarks, which target cross-border transactions between (mainly) related parties seeking to arbitrage differing tax treatments across jurisdictions. During that webinar, we explored the underlying aims and EU-wide interpretations of these Hallmarks. Due to time limitations, however, we set up a subsequent webinar in which we explored three concrete examples: The IP box scenario, a hybrids’ scenario and an asset transfer scenario. The following is lifted from our DAC6 Examples’ webinar, including these items:

You can access the 19 May 2021 webinar video and slides in our DAC6 for corporates webinar recap. 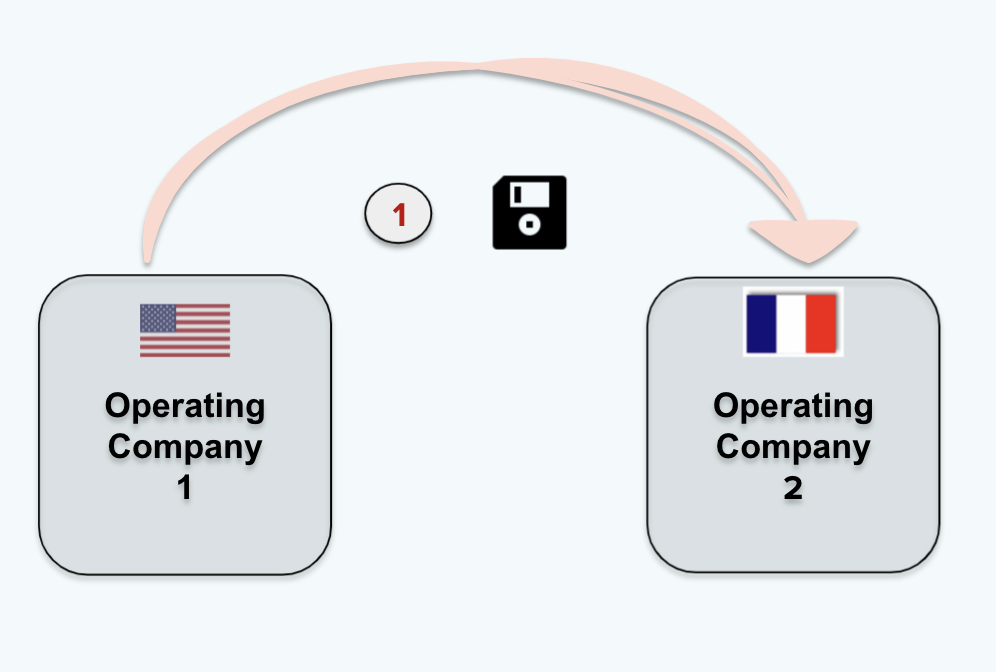 DAC6 Hallmark C4: Asset transfer with a material difference in the price

Here we have an asset transfer amongst parties in different jurisdictions. These companies are not related to one another. The US operating company is selling a software program to the French operating company. This is not a license. This is a software package, right? So it's not a licensing fee, but you're actually buying the software. However, the French company will be paying in annual installments. So the cost of the software is say $100, but instead of paying $100 upfront, the French operating company pays $10 upfront and $10 for the next nine years, I guess you'd say, but 10 years is the way most people would think about it.  Okay, so in the first example, again, that doesn't need to be related. We have a transfer with potentially a material difference in price. Now, why would you have a material difference in price? If these are an arms length transaction between related parties, why wouldn't it just be $100? That's what you sold it for. Well, it's the installment sale aspect that changes the calculus of what the software will be priced at in one of these jurisdictions, let's say it's in the US. So let's say in France, they ignore the installment aspect and they say, that's worth a hundred bucks. The US, they're not going to see this as a $100 transfer. What they're going to see is you paid $10 and you borrowed $90 from the US. Now that doesn't mean it costs you $10. What that means means is of the total $100 that you end up paying, leaving aside time, value of money, out of the total $100 you're paying, a certain amount of that has to be attributed to interest that you paid on the $90 loan that you took out, that 10 year $90 loan that you took out on the day you made the sale. For the sake of argument, let's say that interest is equals $10. And then from the US standpoint, this is two transactions. This is $10 worth of interest being paid and $90 being paid for the actual good that you have in this case sold or could be purchased of course.

That means in these two different jurisdictions, there is a difference in the price for tax purposes. Now the trick here, and again, fragmentation across the EU [complicates the analysis], is this material? Is $10 out of a hundred or $10 out of versus 90? What is that? 10%, 12%, depending upon which numbers you choose. Is that material?  In some jurisdictions, it will be. In some jurisdictions, it needs to be a 25% difference in order to be material. So in many circumstances, especially when you have this constellation between two EU member states, you're going to have to look not only at the different internal tax rules regarding the pricing of assets in such transfers, installment sales. But you're also going to have to look at what the definition of material is in order to determine whether you have a disclosure obligation under DAC6.

As a brief introduction to how transfer pricing works, if anyone's not familiar with it. What transfer pricing laws try and do is they try and figure out, for a transaction between two related parties, they try and figure out what the actual pricing of that transaction would be if it was an arms length transaction. So if you had two unrelated third parties with pure market forces determining the price of the transfer, what would be the value, the cost paid for in this case, the software program? Because as we noticed in example one, if you have a certain setup with a low tax jurisdiction versus high tax jurisdiction, you have a very strong incentive to charge a lot of money to the high tax jurisdiction in order to earn a lot of money in the no tax jurisdiction. And the tax authorities don't like that so they try and figure out what the actual market value of that transaction would be. And they look for what are called comparable transactions in the marketplace. So what would this software cost the French company if it were truly independent from the US seller of that software?  You would find as many examples that as closely correlate to this as possible and the best that support your case on either side. And then you would claim that this is the correct pricing for this particular transaction.

That doesn't always work though. And one of the times that that really doesn't work is where you have what are called hard-to-value intangibles. So in these scenarios, not only do you not have comparables that you can find, because it's a unique enough transaction that there's not a lot of comparables out there, or so many of these transactions take place within one larger group that none of these transactions can truly be considered arms length transactions. In addition for DAC6 transfer pricing purposes, the hard-to-value intangible meets the following criteria. At the time the transaction was entered into, the projections of future cash flows or income expected to be derived from the transferred intangible are very difficult to predict.  So in a situation where the software... I mean, if it was a very common software program, A, you could find a comparable or B, you could project out what the earnings by the French operating company would be. And therefore you could come up with some value, some neutral value that you could ascribe to this transaction.  But what if the software program were revolutionary, had never been seen before? You don't know them. Will it take off? Will it be a big success? Will it be Google or will it be Bing? Will it be Spotify or will it be some player that had similar types of technology, but never took off, right?  So in those early stages, it's extremely difficult to estimate any sort of income flow that you will get from a particular piece of intangible property. Okay, so in that scenario, if those conditions were met, then this particular transfer would be a hard-to-value intangible and would meet the [DAC6 transfer pricing] Hallmark E1.

Then we look at [DAC6 transfer pricing] Hallmark E3, and here we see where the asset or functions transfer has a big impact on EBIT. So earnings before income and depreciation. It's also known as your sort of operating profits. So if you take out the tax elements, how much money are you actually earning through your operations. Now, let's say this software program wasn't just one of the software programs, and the IP wasn't just being sold for limited use, but it was everything in the operating company in the US and they transferred basically their sole purpose of being the software program, their sole earner of income over to France, for whatever reason they did.  Well,  then you would have to consider a [DAC6 transfer pricing] Hallmark E3. And so if at the end of this scenario, this would be after, you actually have to do the financial calculations subsequent, I think, to the transfer, would the impact on the earnings on the US company exceed 50%? In certain circumstances, it will be clear if in fact, all this US company was doing was developing and then holding the software and then transferred it all to a French company, then for sure, the earnings for the US company are going to drop much more than 50%. However, in other circumstances, it won't be clear until afterwards what the impact on the financial statements for the companies will be.

One interesting point here is, I love to harp on, is, you don't have to have an asset transfer. In fact, you don't even have to have what's normally considered to be a taxable transaction of any sort. DAC6 is a very broad view on what qualifies as a transfer, and it also looks at a functions transfer. So what if this software wasn't the software that was transferred, but the software development team that was, all of them were sent over to the French sister company to start developing software there, for whatever reason. There's nothing taxable. I mean, wage, salary taxes, there's nothing taxable about moving jobs for people within a company. That's not a taxable incident most of the time. So you wouldn't even think then that there might be a tax disclosure obligation.  But if in fact, moving the whole software team from the US to France results in a 50% or more drop in the earnings before income and depreciation of the US company, that would meet the standard onto hallmark E3, and consequently that transfer, everyone moving jobs from the US to France would have to be disclosed as a Reportable Cross-border Arrangement under DAC6.

Written by Paul Millen
Paul is a first mover and foremost thinker on the impact of the MDRs and DAC6 on the financial services industry, having spoken on the topic at prominent tax conferences in Switzerland and abroad and published detailed analyses in leading periodicals since 2018. As the founder of Millen Tax & Legal GmbH, he advises a range of clients, including banks, trust companies, fund managers and single family offices, on an array of US and cross-border tax and legal matters, most notably FATCA and CRS.

On 19 May 2021, BlueBridge presented Part II of our webinar on the DAC6 Intragroup …

On 14th April 2021, we presented a webinar on the DAC6 Intragroup Hallmarks: The Hallmarks …

The following transcript is an extract from the BlueBridge Webinar of 19 May 2021, …